Here’s the place to find out more than you ever wanted to know about me. More important, I think, is that you can learn a bit about my two great teachers, Karl Roy and Carleen M. Hutchins. Please feel free to look at a partial list of my satisfied clients; I’d love to have you join this distinguished group. 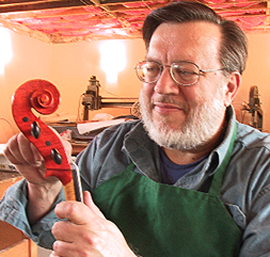 I came late to the profession, having begun my career as a bassist and later as a high school orchestra director. I was thrown into violin work in the early 1970s when I needed to repair school instruments to keep my students playing. I ran a part-time shop in the evenings, on weekends, and during school vacations. I left public school work in 1980 and continued increasing my skills in repair and restoration. I didn’t start making violins professionally until I was in my forties, and then I was only able to do it part-time.

The focus of my work these days is creating new instruments, including the standard violin, viola, and cello as well as all instruments of the new violin family, including the basses. I’ve also designed a line of ergonomic violas to help ease the strain of playing these larger instruments. It’s sometimes hard to believe I’ve been doing this kind of work for almost 50 years. I guess it must agree with me! 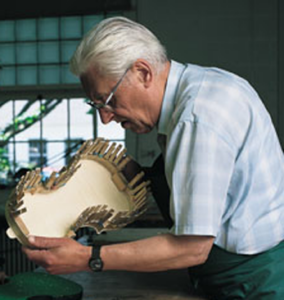 I began my formal training in the craft of lutherie under Karl Roy at the University of New Hampshire starting in the summer of 1974. Karl was then the Director of the State School for Violin Making in Bavaria, Germany. Without his patience, masterful teaching skills, and unwavering confidence that I really had some abilities hidden in me somewhere, I’d still be repairing plywood basses.

I feel lucky to have experienced, even in a truncated and interrupted way, the older method of education that existed between a master and his apprentices. Karl taught me much, but the lesson I valued most was how he trained me to be observant and to notice little things. It is a lesson I have put to good use in all the years since.

Karl is gone now, but I am glad that we have the Internet so I can thank him in front of the entire world.The craft of violin making, which was a dying art in the 1960s, now lives more strongly than ever, and all of us in it owe Karl Roy a debt of gratitude. 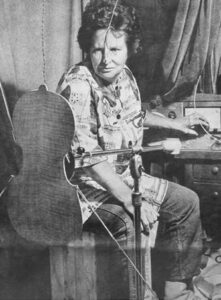 Carleen came later in life to violin work so she could improve her factory viola and play chamber music with her friends. She received instruction in violin making from Carl Berger and S. F. Sacconi, training in violin acoustics from Frederick Saunders, assistance in scaling from John Schelleng, and help over years from top experts in the field of physics and acoustics such as Arthur Benade and Norman Pickering.

During her long and productive life, she wrote dozens of scholarly papers, edited two volumes on musical instrument acoustics, was made an honorary fellow of the Acoustical Society of America, held the society’s silver medal in acoustics, received two Guggenheim grants, and was the recipient of four honorary doctorates. She developed the theory of free plate tuning, which gave the violin maker an important new tool and, I think, changed forever the way that violins are made. What is even more astonishing, that she shared her findings and taught the technique to anyone who wanted to learn it.

I was among the few lucky ones to be a student of Carleen Hutchins. It was the experience of a lifetime, even though I had to walk that fine line between science and art. I am proud and humble to have studied with her in that famously underheated garage in Montclair, New Jersey. Carleen’s teaching is one of the reasons I feel so strongly about the New Violin Family. Carleen passed away on August 7, 2009, at the age of 98. Helping to make her dream successful remains one of just a few ways I can repay my teacher for her great gift.

*To keep the record straight, I made a viola for Dan when he was still a young violin student. My wife made him a beautiful 3/4 violin when he was a child prodigy in Georgia.

I occupied my first “shop” in 1974 in a small room on the third floor of the old high school building at Ithaca, New York. The space was small, windowless, and had functioned at one time as a supply closet! I used it one or two nights a week for several years mostly to work on project instruments.

Later, as my skills and training improved, my new assistant, Deena Zalkind (later my wife), and I moved into a small suite of rooms (with real windows!!) on the same floor of the same building. We worked there until the end of 1979 when we left for Washington, D.C. with a brief side trip to Salt Lake City.

After we returned East, Deena and I worked in a shop for a few years in the early 1980s, but the commute began to get to us and we opened a shop in our home and began doing repairs and making new instruments on order as “Robert & Deena Spear, Violin Makers.”

You *can* go home again.

I designed our new home outside of Ithaca, New York, and we returned as the 20th century gave way to the 21st. Deena eventually moved on to other personal and professional pursuits, and I retired to spend time writing, teaching, and designing new instruments. Or so I thought.

Then in 2008 the great recession came along, and I soon had to un-retire and re-establish my workshop. I work out of my home now with the part time delight of teaching four wonderful people.